July 11
Today was a day of mixed emotions, I was happy...but sad: it was our last ministry day. I'm happy to go home on the plane tomorrow, but sad to leave the Peruvian people and my new friends.

The day started off like every other day...we sang the morning song:

Today we were supposed to stop and perform at three different schools.

Well our first performance was our best that we've ever done! When we had the alter call, all of the kids came down, not exactly to pray but to meet the cast of the drama. I do believe there were several who accepted Christ though. At the last place we stopped there was a little boy named Pierro who was so cute, and smart. Well, he practically fell in love with Liz...it was adorable!

Tonight at FUAGNEM, Susie Shellenberger announced that there had been 7,171 salvations these past two weeks!!! How amazing! Tonight was also crazy hair night...it was lots of fun. I call my look the "Gibson girl toothbrush look".

July 12
Today we went shopping at the Indian Market. I got everyone something, except for Michelle (my little sister) and was freaking out because we were running out of time and I couldn't find a cute doll (cheap). So we were heading to the bus, and I was practically in tears because I didn't have anything to give to my little sister! Anyways, one of the translators that had been with my groups while we were shopping comes out holding out this little doll! And I was so happy that I nearly got run over by a bus! Hahaha...

At out last FUAGNEM we found out that their had been even more salvations and that the total was now 7,236!!!! How amazing God is!

July 13
Well we arrived in Miami early this morning and I was going to have to wait until 6 at night before my flight left for DFW, but when I was checking my bag in, the lady asked if I would like an earlier flight. I was like sure!!! So she gave me a flight that left in 30 minutes!!! I had to hurry and say my goodbyes, go through security, and run to my gate! When I got there, I looked at my ticket and there was no seat number on it. I thought maybe it was a mistake so I went to the desk and asked the lady and she says, "Well...you are on standby" etc. So I was so scared I would not be able to make it on that flight (I especially didn't want to have to go back because one of the leaders that had been on my team turned out to be going on the same flight that I was on standby for). Thank goodness the lady finally called my name and I got a seat number!

I was so happy to see my family when I was going down the escalator!!! And I am glad to be home.

I had the best time and I got to see God working in such amazing ways!!! I feel so blessed that I got to be part of such an incredible adventure!!!
No comments: 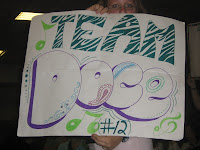 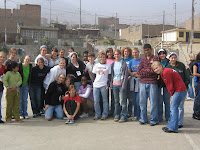 A look at El Pueblo (the hotel that we stayed in)
Me by the El Pueblo sign on the top of the mountain:

Some children that we met:

My costume for the drama 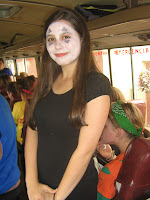 Pictures from the drama: 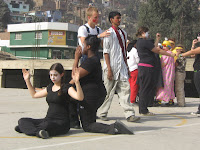 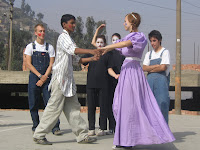 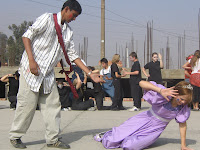 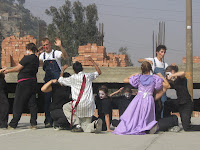 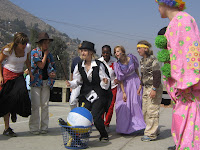 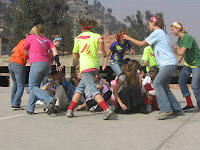 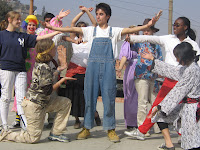 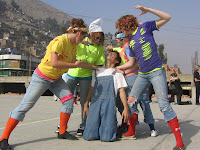 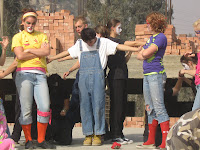 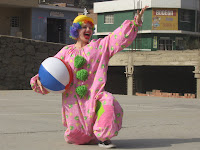 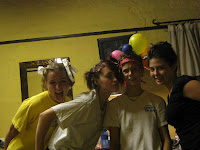 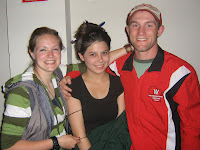 Hello everyone! This is my first entry in my blog and I thought I'd write about my mission trip in Peru.

June 30
Well I am here at the hotel. I have met 2 of my roommates and several people on my team. Everyone is very nice, especially our team leader Danny. I was very nervous this morning, but now I am just excited! But I am VERY hungry!!! The flight was a little over 2 hours.

July 3
Well we have been busy rehearsing the drama that we are doing: Spellbound, Toymaker and Son...I am a mime. We arrived in Lima early this morning and we have been napping ever since.

I just got back from dinner and it was...different. Ummm, it was okay. We are off to practice the drama a few more times before we leave to perform it tomorrow. I have met somre really great people and my roommates are nice too. I am in room 406 and all my other frends on my team are like our next door neighbors.

This morning, at around 5 am, we arrived in Lima, Peru. We had to wait FOREVER to get our bags and to go through customs. We were all SO tired because we had been up all night! We had to be in the bus for a while to get from the hotel in Miami to the airport.

July 4
Happy fourth of July!!! Wow, what a day it has been ! We just got back from our first day in the city and let me tell you...it was crazy! When we got up, we went to breakfast and then to our team meeting. We found out that our speaker was broken, which meant we couldn't do our drama. Finally we got a new one that did work and we got sent off to Lima.

In the bus, we met our translators and learned "The Morning Song". We arrived at a mini futbol field. We started going in small groups to nearby people invinting them to see the drama. Then we got dressed and put on our make-up. After that, we performed the drama.

One of the things I have to do as a mime is have a money bag and the prince has to take from me...well, more like yank it from me. Anyways, I had my hair in two braids today and Chris, the prince, pulled one of my braids instead of the money bag...accidently. I nearly started laughing!!!

Well, after the drama, we were supposed to go out into the crowd and ask if they understood the drama. Right when I walked up, this little girl runs over and hugs me! A little while later, we washed and braided little children's hair. When I went back on the bus, I grabbed some stickers and bracelets to give out. Well, I was mauled by little children and their mothers!!! I kind of felt like I was in a horror movie.

Well we played all different games...like "perro, perro, ganzo" but it is actually supposed to be "pato, pato, ganzo", though we didn't realize it until later that day. While we were playing duck, duck, goose...I told a little girl sitting beside me that I liked her princess sticker. Well she took it off and gave it to me! Well, I thought it was the sweetest thing, so I gave her one of the bracelets that I had left. Well she didn't think that the trade was even so she gave me a little hair band that was on her wrist. But then she took that one back and gave me the other one that was on her wrist...the sparkly one!

July 8
Well, the past few days we went to poor areas and washed clothes and hair, did the drama, and played with kids. Yesterday and today we have gone to two different places each day. When we get there, we go out to invite people to the drama, perform the drama, pray with the people who became Christians, and leave.

When we go out to invite people, I am usually the only one that invites in Spanish, everyone else just use a translator. Yesterday, after inviting two different houses, the translators talked to them both and they invited Jesus into their hearts right there! It was so cool! Plus I got to pray with one family and one little girl as well!!!

Today, after the drama, I got to pray with another little girl and eight grown-ups with one of my new friends Kate...she plays the evil magicion.

Tonight, we are all a bit nervous about FUAGNEM (Fired Up And Going Nuts Every Second). Everyone can tell something exciting is going to happen!

Later that night
Wow, we just got back from FUAGNEM and it was very impacting! First Susie Shellenberger gave a talk on something I had never heard talked about before. It was about the paralyzed man who sat at the healing pool for 38 years waiting to be healed. When Jesus comes up to him, he asks the man if he wants to be healed. At first you're thinking, of course he wats to be healed, he's been sitting there for 38 years! But then when the man answers, he doesn't give a yes or no answer. And you get to thinking, maybe he doesn't really want to be healed. Maybe he's been sick for so long, he's not sure what will happen. Anyways, the moral of the story was to give everything to God and give Him control of your life.

After Susie talked, she had all the teams meet in a seperate place in the room and share what we need to either give up or get. Everyone was very homest and emotional when it was their tunrn to share. I said that I need/want to have a closer walk with God.

Today, Deanne (one of the leaders) gave me an encouraging note. It says,

"Rebecca,
Thanks for using the Spanish God has allowed you to have for His kingdom purposes. I appreciate your sweet spirit and smile and helpfulness on this trip. Keep following Jesus to His abundant life."

I thought it was very special!

Being a mime in the drama is hard work because first, you have to sit corss legged in the front, holding your hands up, with a blank expression on your face. Second, because when you die you have to roll around in the dirt (you are wearing black, which gets dirty easily!). And third, becuase your whole face is painted completely white and you can't itch your face at all!!! But mimes are a very important part of the drama! LOL!!!

July 10
Wow, isn't God good?! Today, everything bad that could happen, happened! During the beginning or the drama, the mp3 player that played the music and narration ran out of battery, so we went through the entire drama without music! Then a little ked runs onstage and starts talking to whoever was acting at that time.

Anyways, it was HORRIBLE!!! But, at the end when there was an invitation for people who wanted to become Christians to come up to the front...we had the most people come up than ever before! I think that was God's way of showing that it isn't us who are doing anything, but God is the one who is convicting the people! How cool, right?!

Okay, so Pam Stenzel talked again tonight and she told this story that I thought was awesome:

Once there was a King who fell in love with a peasant. He had three options:

Well, that's what Jesus did for us. He was sent to live amoing peasants for us to choose, not be forced, but able to choose to love Him and follow Him. I just thought that was the coolest story ever!