Today is the first day of Little Women of 2010 week.

But maybe you don't know exactly *which* character you're most like. I found a QUIZ online that I thought was fairly accurate. Of course, if you know the story of Little Women pretty well, you can figure out who you'll get if you answer a certain way, and so on...

Here's what I got: 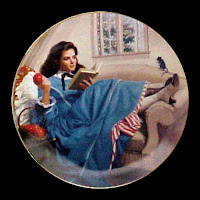 "Christopher Columbas you're Jo! ! You're out going and don't care a bit what people think about you. You love acting and you never want to grow up."


Also, just want to let you know about some exciting things that are going to be happening at "A Young Lady's Blog" this week! I'm going to be posting about an awesome giveaway either tomorrow or the next day. There will be quite a few different ways to enter the giveaway and you're really going to want to get as many chances as possible because it's a really cool prize!!!

In addition to the giveaway, I'll be posting something at least once a day...either *my* entries in certain categories or just posts about Little Women. I've got quite a few ideas that I've already started working on! :)

If you're just tuning in and don't know anything about the "Little Women of 2010" Challenge, go HERE to check it out!

If you've made posts for Little Women week, but haven't linked them to my blog yet, do so HERE.

Thank you so much for participating! This week is looking like it's going to be super fun!

Ha! What in the world? I got Jo - when I was purposely trying to avoid that result. lol. Oh well. Had fun anyway!

Genevieve is Beth.
Marguerite is Beth too...?
And Aimee is Jo.

I got Jo as well!LOL! I took the Sense and sensebility quiz, and I could NEVER get anything other than Elinor Dashwood!!! But my sister got on and got Marianne right away!!! creepy....