of snow, microphones, and a famous lady. 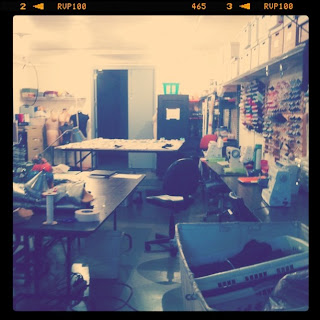 three days of working at casa manana. oh it's been such fun!
tuesday i went up there...and i will confide in you...my stomach had such butterflies. i was simply terrified. i didn't know what to expect. i didn't know what i would be expected to do. i didn't know anyone else that would be there. and if you know me...i don't do well in situations like that.
so i got there...went through the backstage door (THE BACKSTAGE DOOR AT A FAMOUS THEATRE!!!!), and sat down in the green room. luckily there was another intern already there. and i found out she was also going to be working in the costume department. *sigh of relief* another intern entered as did the "main guy" in charge of us.
we went backstage and saw some "set guys" working on taking down the set of their last show "wizard of oz." we were told to grab screwguns and start unscrewing some wood panels on the stage. the other girls started...and i was left in a confused state of panic. holding a screwgun. and yet knowing nothing about how to use a screwgun. luckily one of the "set guys" noticed the confused look in my eye and asked if i knew how to use a screwgun. i shook my head. he responded by showing me how.
I NOW KNOW HOW TO USE A SCREWGUN! HURRAH!
the rest of the day was spent in all manners of unscrewing, sweeping the stage (oh how i dislike the man who invented snow machines), and working upstairs in the lighting booth labeling light gels.
we were told we could leave early. an hour and a half early. unfortunately my mother had not been told this. we live an hour away. so there i was. sitting in the green room. preparing for an hour long wait. however, "main guy" came and saw me and realized his mistake. he asked if i would mind coming back onstage and helping pull up tape and sweep (that fake snow will NOT be swept!) since i was still there. of course i didn't mind! it was actually quite a bit of fun. "lighting guy" was still there too. and he and "main guy" started peeling through the layers of paint on the stage and telling stories of each show they'd done there. i laughed quite a bit.
day two. wednesday. more sweeping. oh me oh my. however after an hour of that "costume lady" (EEP!) came and asked if there were interns available to help. SCORE! we spent all morning in the fabric trailer (THEY HAVE A TRAILER SIMPLY FOR FABRIC!) going through some old curtain fabric that had been donated from the prop department.
that afternoon, however, was spent doing a spring cleaning in the costume warehouse!! she was literally throwing out (for goodwill) all of these old costumes they didn't want/use anymore. it hurt my heart as i filled up trashbag after trashbag with costumes. she saw our faces and said we could take whatever we wanted they they were throwing out. me = "AAAAHHH!!! YES!!!" 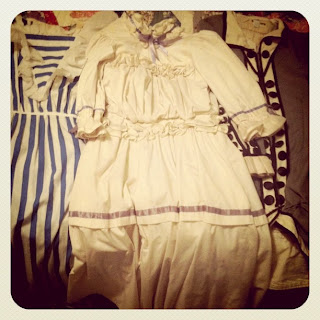 i brought home three costumes that dearly needed a home.
day three. thursday. i woke at 5:30 am. i left the house by 6:00 am. we got there 7:15 am. what was the game plan for the whole day? a giant awards show rehearsal in the morning...and the actual show that night. i was assigned to "costume lady" all day! DOUBLE HURRAH!
the betty buckley award show. named in honor of the tony award-winning actress, the betty lynn buckley awards celebrate excellence in high school musical theatre. all local high schools that produce a musical are eligible to participate in the program. a panel of judges votes for a winner in each of 16 award categories. each school nominated for "best musical" is able to perform one of the numbers from their show at the awards show.

each high school was allowed to use ten microphones for the main singers/performers in the number performed at the awards show. there were rehearsals that morning/afternoon and then performances that night. i was given the opportunity to help tape microphones on the performers for rehearsals and shows.

one. i had no idea what i was even doing at first.
two. i'm far too short to be taping microphones on tall people.
three. putting tape on stranger's faces...is awkward.
four. I LEARNED SO MUCH! what an awesome learning experience.

and you know what made the day even better...? BETTY BUCKLEY SMILED AT ME!!!
oh, happy sigh.

longest day ever (after returning home at midnight)? possibly. but such fun! since then i've been resting up. however, today i started a whole new adventure. my mother and i (and two friends) decided on an improptu road trip to joplin, mo to help the tornado victims from the devastating storm last week. please keep us and the residents of joplin in your prayers this week as we work in the debris.

So you're in Joplin??! How long will you be there?
We have been gathering and organizing supplies and donations to bring up there, my family heads up tomorrow. My sister Jessie along with her family and in-laws live just 20 mins from Joplin. The people of Joplin definitely need prayers and help. I'll be praying that all you do is huge blessing!